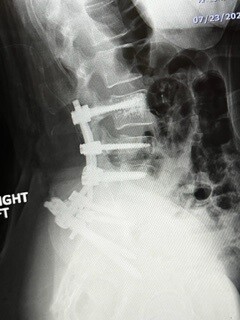 PHOENIX  — A Valley woman is raising awareness about Valley Fever after her case went undiagnosed for months and led to a potentially life-changing surgery.

Inside the home of Tiffany Domingo, 48, she smiles as she talks about her paintings hung on her living room walls. That passion to create art is now on pause as she looks to recover from back surgery stemming from Valley Fever, of all things.

“I can’t really lift much, no more than five pounds,” she said.

Back in February, Tiffany says lower back pain spread down her leg. She thought it may have come from when she fell on her backside while on a hike but after regular visits to a chiropractor, the pain never went away.

“I’d get temporary relief but couldn’t understand why it was getting worse,” she says.

The pain got to a point where she couldn’t get out of bed, describing having to crawl to the bathroom.

In search of any pain relief and an answer to her crippling pain, she got to get an MRI and learned one of the lowest vertebrae in her spine, her L4, was being crushed in addition to a bulging disk.

That’s when a spine surgeon pushed the panic button.

“He said something is wrong here, you need to go to the hospital right now,” she said.

Tiffany is now recovering from a back surgery.

Her x-rays she shared show what she calls “hardware” in her bones to keep her vertebrae separated and eventually alleviate some of her pain.

After the surgery, doctors gave her a diagnosis she never expected.

“They were able to take cultures when they did the spine surgery in my back, they sent them out and sure enough it tested positive for coccidioidomycosis, which is the fungus that grows from Valley Fever,” she said.

This is the time of year dust storms can lead to more cases of Valley Fever.

ABC15 Health Insider Dr. Andrew Carroll says, if untreated, the fungal infection can leave an infectious nodule on your lungs and even spread to other parts of your body.

In Tiffany’s case, the fungal infection spread to her bones which caused them to deteriorate.

When asked how common it is to see Valley Fever impact bones, Dr. Carroll said “having Valley Fever get to your bones is very unusual, but it does happen.”

His advice is to avoid dust storms if possible. If you end up in a dust storm, wear a face covering.

Dr. Carroll says new residents to the Phoenix metro area are more likely to get Valley Fever in their first five years of living here, as they adapt to life in the desert.

Tiffany has been in phoenix for four years.

She’s sharing her story in hopes to make others aware saying she has “a responsibility” in hopes others know the dangers of lingering Valley Fever.

Even though she expects to be limited for the next year, she knows it could have been worse.

“I feel very fortunate because I could have been paralyzed,” she said wearing a back brace she expects to have on for the coming months.