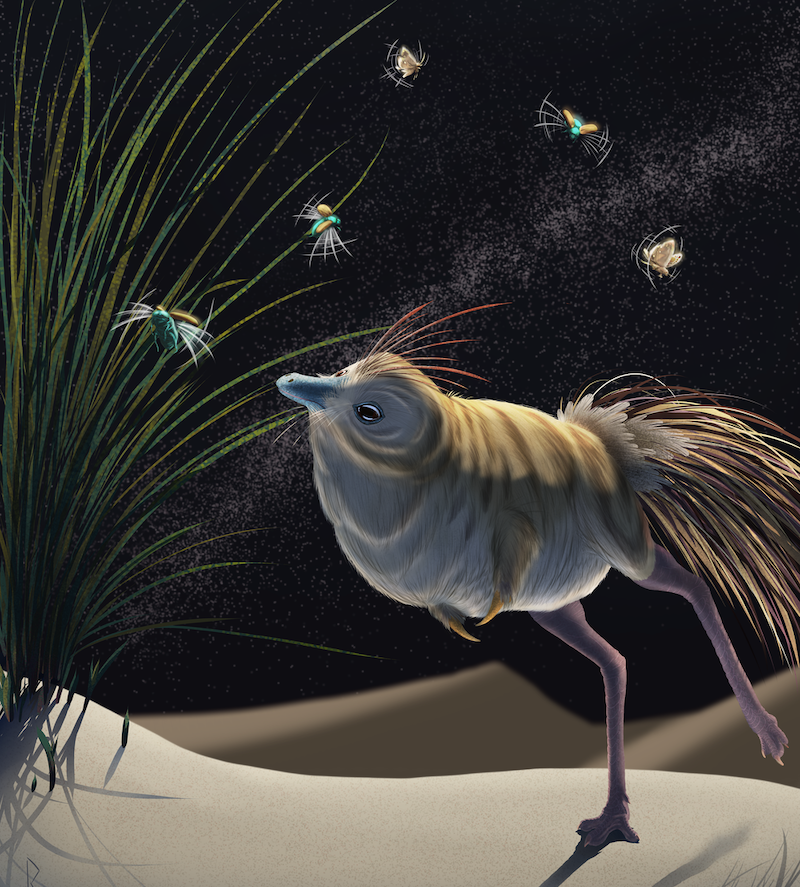 Artist’s concept of Shuvuuia deserti, a dinosaur that, while small, had very efficient night vision and hearing. Image via Viktor Radermaker/ SciTechDaily.

There are many modern-day nocturnal predators, animals that hunt at night under cover of darkness, including barn owls, bats, leopards and hyenas. But what about 100 million years ago, during the time of the dinosaurs? Were there any nocturnal beasts roaming around in the dark way back then? New research suggests there were.

The researchers found that the first species – Haplocheirus sollers – had very good night vision. The second species – Shuvuuia deserti – had excellent night vision too, but also something else: very sensitive hearing, similar to modern-day owls. That combination made S. deserti, in particular, an ideal nighttime predator. According to the paper, published May 7, 2021, in the peer-reviewed journal Science:

Owls and nightbirds are nocturnal hunters of active prey that combine visual and hearing adaptations to overcome limits on sensory performance in low light. Such sensory innovations are unknown in nonavialan theropod dinosaurs and are poorly characterized on the line that leads to birds. We investigate morphofunctional proxies of vision and hearing in living and extinct theropods and demonstrate deep evolutionary divergences of sensory modalities. Nocturnal predation evolved early in the nonavialan lineage Alvarezsauroidea, signaled by extreme low-light vision and increases in hearing sensitivity. The Late Cretaceous alvarezsauroid Shuvuuia deserti had even further specialized hearing acuity, rivaling that of today’s barn owl. This combination of sensory adaptations evolved independently in dinosaurs long before the modern bird radiation and provides a notable example of convergence between dinosaurs and mammals. 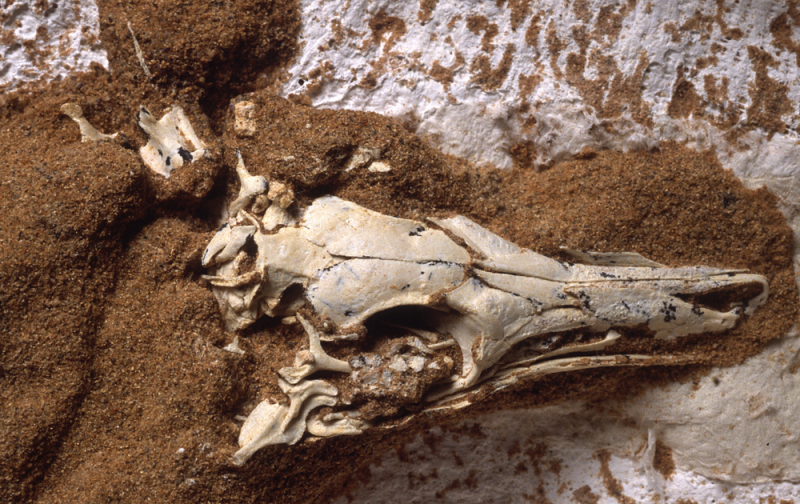 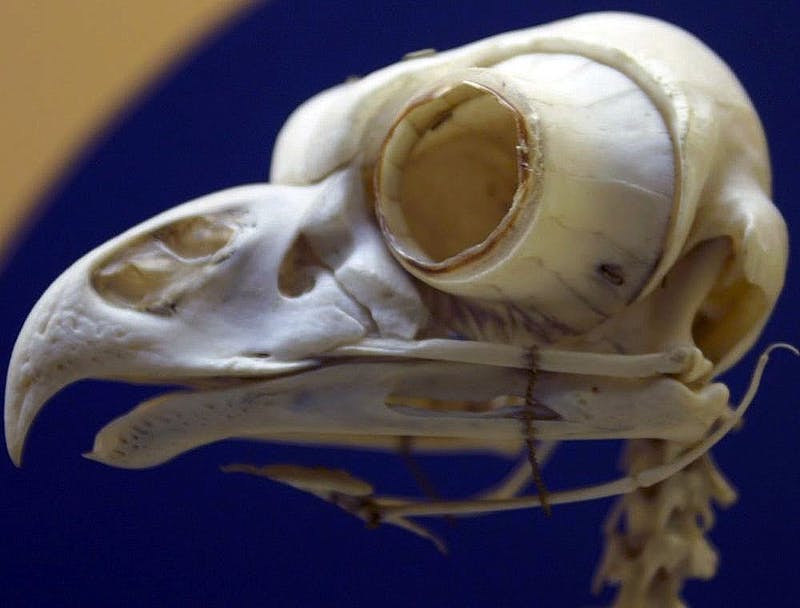 S. deserti was a small dinosaur that lived in the deserts of ancient Mongolia. It is the first known species of dinosaur to have had both great hearing and night vision.

How did the researchers determine these traits existed? First, they used scans of the fossilized skulls of both species, as well as other theropods to examine them in more detail. They were able to digitally reconstruct the eyes, and found that S. deserti and H. sollers had some of the largest pupils ever seen in any theropods. This suggested that the eyes were well-suited to nocturnal imaging. In particular, the pupils of S. deserti made up more than half of the eyes, similar to geckos and nightjars.

By comparing these eyes to those of 55 current species of lizards and 367 species of birds that exhibit day or night activity patterns, the researchers concluded that that there is a greater than 90% chance that both species were nocturnal.

One of the researchers, Lars Schmitz at Scripps College, had previously found evidence that some small dinosaurs probably hunted at night. Most of those were theropods, but only 12 species were known to have eye structures that hinted at night vision capabilities. The current team of researchers found four more. Seventeen species were also found that contained preserved structures of the inner ear. In four species, measurements were obtained for both eyes and ears.

Rectangular bone plates in the eye structures called scleral ossicles, or sclerotic rings, provided the clues about night vision. They are thin and form a raised ring-like structure around the pupils, and can be found in both dinosaurs and modern-day lizards and birds. The larger the pupil was compared to the rest of the eye, the better the dinosaur could see in the dark (as is true for animals today).

While H. sollers and S. deserti showed the strongest evidence for nocturnal abilities, the researchers looked at other species as well, such as Coelophysis kayentakatae (previously known as Megapnosaurus kayentakatae), Almas ukhaa and Velociraptor mongoliensis. Of the three, M. kayentakatae and A. ukhaa were better suited for nighttime hunting, while V. mongoliensis had eyesight more ideal for hunting around dawn or dusk. 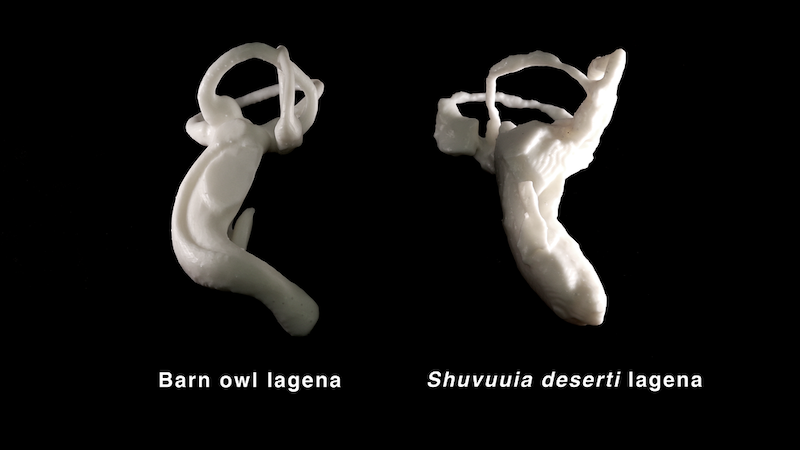 Comparison of the lagena and inner canal in a barn owl and S. deserti. Image via Jonah Choiniere/ Wits University/ CC BY-ND/ University of the Witwatersrand, Johannesburg. 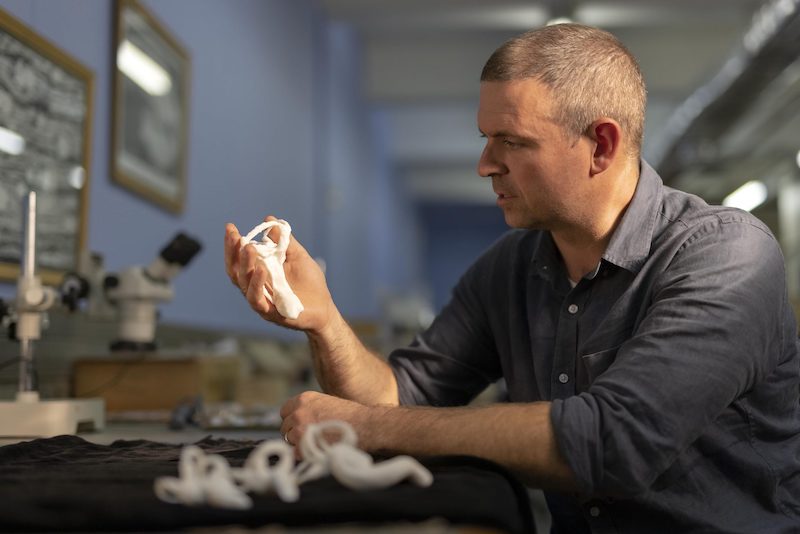 Jonah Choiniere, lead author of the new study, is seen here holding a 3D printed model of the lagena of S. deserti. Image via University of the Witwatersrand/ SciTechDaily.

As already noted, hearing is also very important when it comes to hunting at nighttime. To further study this, the researchers scanned 17 fossil skulls of various theropods. The researchers wanted to compare the structure of the inner ear of these extinct dinosaurs to those of modern animals, including birds.

The results indicated that S. deserti had very sensitive hearing to go along with its excellent eyesight. The scans revealed a rather long lagena and ear canal for the size of the skull. This again is like the modern day barn owl. The elongated lagena and ear canal was also much longer than the 88 other bird species that are alive today. The study of the lagenas and ear canals also suggested that predator dinosaurs had better hearing than herbivores.

As I was digitally reconstructing the Shuvuuia skull, I couldn’t believe the lagena size … I called Prof. Choiniere to have a look. We both thought it might be a mistake, so I processed the other ear; only then did we realise what a cool discovery we had on our hands!

I couldn’t believe what I was seeing when I got there, dinosaur ears weren’t supposed to look like that!

The findings shed new light on how nocturnal dinosaurs lived, both hunters and plant-eaters. S. deserti stands out as the most extreme example, with both advanced night vision and hearing. It was small, but highly skilled at pursuing its prey. Fellow carnivore V. mongoliensis was also adept at hunting at night, although not to the same degree. A herbivore, Protoceratops mongoliensis, also had good night vision. 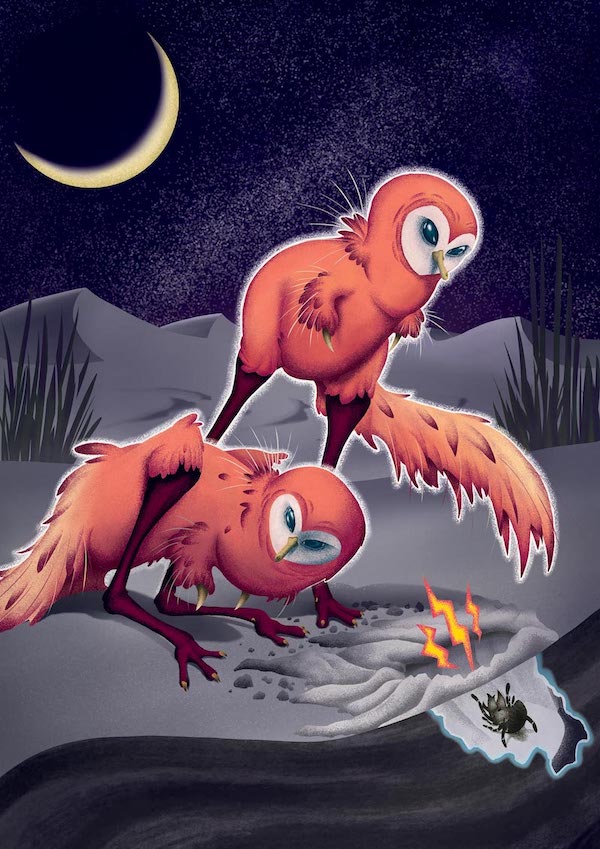 Were there any other dinosaurs in that region with the same level of night vision and hearing as S. deserti? Scientists don’t know yet, since the right fossils are hard to find. Perhaps future discoveries will reveal dinosaurs with senses even more extreme and fine-tuned than S. deserti. But when it comes to nocturnal hunting, S. deserti certainly seems to have been in a league of its own, according to Choiniere:

Nocturnal activity, digging ability, and long hind limbs are all features of animals that live in deserts today, but it’s surprising to see them all combined in a single dinosaur species that lived more than 65 million years ago.

There is a stereotype of sorts that most dinosaurs were relatively dumb, lumbering beasts, but these new discoveries prove that some were just as efficient at hunting and foraging at night as many contemporary animals.

Bottom line: New research shows that Shuvuuia deserti, a small dinosaur that lived in the deserts of what is now Mongolia, had exceptional night vision and hearing, similar to modern day owls and other predators.

Source: Evolution of vision and hearing modalities in theropod dinosaurs

Via University of the Witwatersrand, Johannesburg