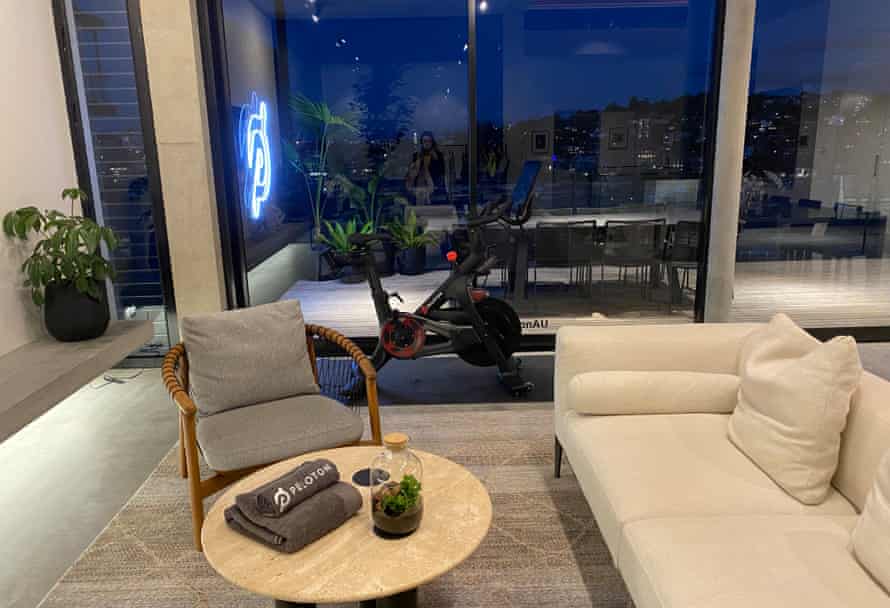 I am trapped on a machine, alone, in the bedroom of a stranger’s mansion. Outside, yachts bob on the glittering harbour. It is dark inside, lights dimmed to appreciate the floor to ceiling views. In the corner to my left a fiddle leaf fig sits with leaves polished to gleaming emerald. To my right – just out of reach – my phone lies on the bed, denting the pristine white doona. My feet are locked up with robotic precision. I jerk the right one up and down, side to side, trying to break free. It will not come unstuck. The last time I saw my heart rate, it read 171 BMP.

I try for the left foot instead. With a twist and a yank it comes loose. Arching my leg up over the machine I contort my body through a modified banana pose and grab the phone. I need to document the moment my virtual trainer faded into a spiral of grey dots, how he left me stuck and panting.

I am at the launch event for Peloton in Australia.

In early December 2019, Peloton entered the Australian consciousness through a Christmas campaign gone awry. The viral ad, deemed “dystopian” and “sexist” saw the company’s $9.39bn valuation plummet by close to 16%.

The commercial stars a woman with wide, expressive eyes, frantically spinning on a stationary bike, she never seems to leave her house. It looks like a hostage situation, with Stockholm syndrome setting in.

Then a pandemic hit. We all spent a frantic year spinning our wheels at home. We had crossed into Peloton’s timeline.

Peloton’s core promise is an at-home recreation of a boutique fitness class. The brand is best known for its exercise bikes, but the machines would be unremarkable were it not for an accompanying media empire – a catalogue of over 15,000 workouts, with more live streams added daily, led by 40 trainers in a pair of $50m production studios located in London and New York.

The company now boasts 5.4 million subscribers, and its market capitalisation, while volatile, currently stands around US$32.72bn, more than triple the days before that fateful Christmas commercial.

Every American podcast I listen to talks about Peloton now. The brand’s trainers have transformed into celebrities. Critic Wesley Morris used a Peloton class as a jumping-off point for a complex discussion of race. Amanda Hess calls the platform “total curation of the mind”. Joe Biden has a Peloton. It is possibly a risk to US national security.

It is on a wave of hype, takedowns, counter-arguments, a product recall and yet more hype that the fit-tech company will wash onto Australian shores. The website will go live 15 July, followed by physical stores in blue chip locales.

To demonstrate the offering, they rented out a four-storey mansion in Sydney’s most expensive suburb, Darling Point. It is the perfect location to pitch a device that starts at $2,895, with an ongoing subscription cost of $59 a month.

After a talk through the company’s history, its tangible products (bikes, apparel, abs) and the value of being high-fived by a stream of strangers on the internet (C number two), it is time to meet the machine.

If a Bond villain commissioned a stationary bike for the lower deck of his super yacht, he would likely end up with a Peloton. They are compact and matte black, with an orange resistance knob flaring from the crossbar. Perched just beyond the handlebars is a king-sized touch screen of dazzling resolution.

You must wear menacing cleat shoes to ride a Peloton, which clip your feet into the pedals with a magnet and three bolts affixed to an orange chevron. This is to prevent you toppling sideways when the trainers instruct you to rise from the saddle and ride erect.

I am vocally averse to cardio. Someday, I know, this will kill me. I’m aware that exercise is the most important thing I can do for myself, and that this distaste for fitness likely exacerbates my frequent bouts of anhedonia.

So, I look forward to hating every second of this experience. Despite the fact that his class is far above my level (sloth), I choose to train with Alex Toussaint, because I’ve heard the most about him on podcasts. Also he has the best playlist.

Much to my dismay, I discover I do not dislike it. Attempting to get in sync with the suggested pedal rate (“cadence” in Peloton parlance) is too difficult to be boring. Meanwhile Alex’s stream of affirmations, lyrics and consciousness are surprisingly affirming.

Then the wifi cuts out, the stream freezes and I am left without an instructor. The clock still counts down, my cleats are firmly locked in. I could push through, but it is immediately unbearable.

I am in awe of the power of C one – content. The instructional video, with its premium production, well synched soundtrack and charismatic trainer act as a powerful anaesthetic. Peloton’s baseline offering – a subscription app that offers the workout videos without the hardware for $12.90 a month – suddenly makes sense. Without Alex to urge me on, exercising on a Peloton is just plain exercise: awful.

When I manage to get the video back, I finish off the workout. Usually after exercising, I swell with rage. Just two days earlier, a 10 minute HIIT session left me irritable for several hours. This does not happen with Alex.

I check my Apple Watch and it tells me I have burned more calories, more quickly than ever before. Lawson says that Peloton users workout, on average, 26 times a month.

I begin to imagine this could be my life. That a steep financial commitment is all it takes to change a seemingly inevitable trajectory toward decline.

I think about how it might feel, in a world of alarming statistics, to log into a live class and see a different figure: 15,000 fellow riders, pedalling our way out of an early grave. Alone but together.

I imagine slipping back in time to 7 December 2019, and purchasing shares in Peloton.

In an expensive house, on an expensive bike, watching an expensive trainer groove to expensive-to-license music, it is hard not to topple into aspiration, no matter how firmly your cleats are locked in.