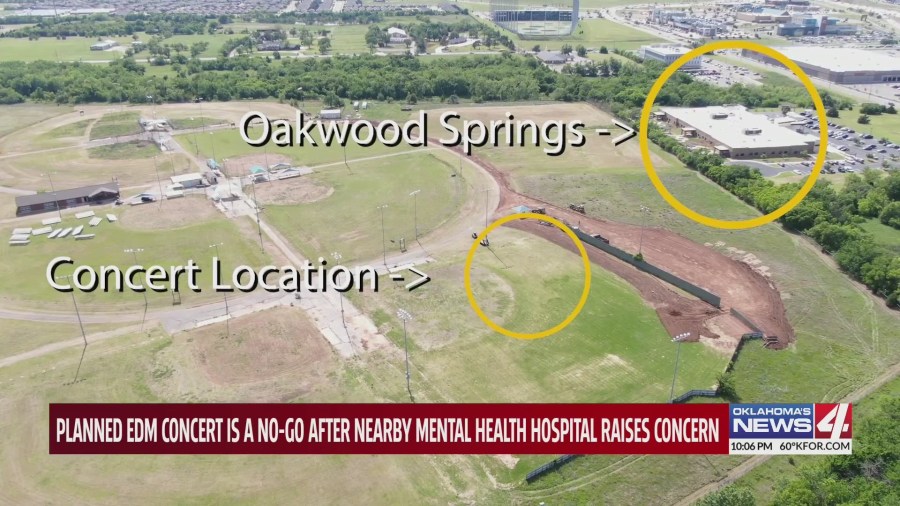 OKLAHOMA CITY (KFOR) – Officials with The Criterion music venue say the EDM concert scheduled for May 28 at an Oklahoma City park has been officially canceled.

The Subtronics: Oklahoma City Monster Energy Outbreak Tour 2021 show was scheduled for May 28 at a RedLands ball field near NW 122nd and Western.

The space is just behind Oakwood Springs, a behavioral health hospital serving patients who are working through mental health problems and addiction.

The headliner of the concert was slated to be a Philadelphia-based dub step artist.

The music is loud and has a heavy beat, as well as some lyrics the health center staff wants to protect their patients from. Specifically lyrics like, “We all gotta die sometime.”

“So having lyrics like that blasting into our courtyards, our sleeping area, it’s just horrible,” Van Bramer said. “It just is not acceptable. It will cause harm.”

Last Thursday, Oklahoma City officials denied a noise permit for the promoter, Relentless Beats. If the show goes on anyway, they could be cited by the city.

Now, concert officials say the show will not go on.

“Any loud concert directly adjacent to our property would be extremely harmful to our patients.

We thank city officials who took the time to look into this issue and who decided not to issue a noise permit for this show.

We would also like to recognize event promoters who came to realize hosting a concert at this sports facility would do more harm than good, and who cancelled the event rather than engaging in any further conflict. We appreciate their concern for our patients’ wellbeing.”

KFOR reached out to the promoter, Relentless Beats for comment but never heard back.