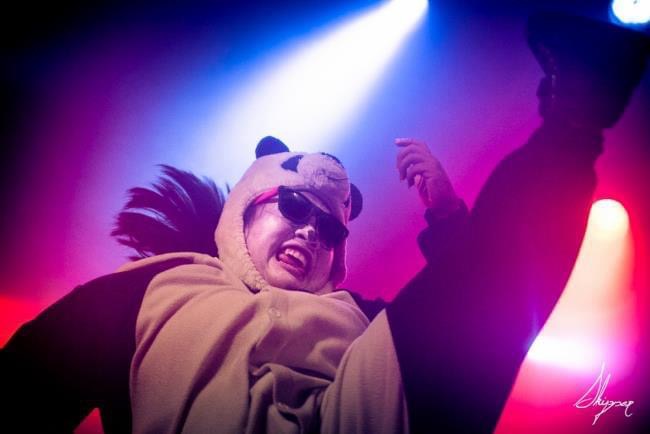 AUSTIN (KXAN) — Is there a band or singer your parents listened to while you were growing up who influenced your music choices? For Austinite Vanda Taupradist, it was Stevie Wonder.

The icon influenced more than Vanda’s music playlist, it sparked a Keep Austin Weird vibe that took her around the world. She competed in Denmark’s Air Guitar championships, performed in two music videos — one in London and the other in Vienna — while wearing her signature panda suit.

“My life would be so significantly different if I never became Vanda the Panda,” said an energetic, bright-eyed Vanda. She describes herself as always ready to live life to the fullest.

Previous Blog: ‘Tell a story about how much further we go together’ — You don’t have to struggle with mental health alone

The origins of Vanda the Panda started during her college days at the University of Texas at Austin. She would go around campus and Austin wearing her panda suit. It was her outfit for the summer of 2011, the year Stevie Wonder headlined the Austin City Limits Music Festival.

That hot summer day, Vanda the Panda went to the festival and the first thing she did was sit right in front of the stage where the singer would perform 10 hours later. No snack or restroom breaks, Vanda camped out. Back then the festival was held in September, and you know how Texas summers don’t really end until mid-October.

“It was so hot,” she recalled. “All my friends were like ‘You’re going to die’ and I said ‘No! I’m not going to die! I’m going to wear this panda suit!”

Festival workers helped her stay hydrated by giving her water throughout the day.

“He ended up playing the most amazing show,” Vanda said. I could never imagine I would be there in the front row.”

That determination, the decision to commit and endure the Texas heat to see the superstar she listened to and cherished growing up, also rescued Vanda from a trajectory of health issues.

Previous Blog: Loving our moms and the conversations we’re afraid to have as caregivers

Six years ago, Vanda weighed 325 pounds. At 24 years old, she gave in to the idea of not living a healthy lifestyle. This meant not going to stores to shop for clothes, and bringing a seatbelt extension when she traveled by plane. She was also comfortable knowing she would develop hypertension or diabetes.

Vanda maintained that same mindset when she found out about her father’s diagnosis. He was given six months to live after doctors discovered he had stage four colon cancer.

“He was just the type of guy to never go to the doctor,” she explained.

Vanda remembers the day she heard the news when she went back home to visit her parents in Houston. She was heartbroken but then realized how much she took her health for granted.

“My dad is about to pass away. I need to show him that I love and appreciate all the support he gave to me,” Vanda said as she held back tears. “I know it was really hard for him to see me be so unhealthy.”

Vanda returned to Austin from that trip determined and used fitness as a prescription for health. She worked out with two personal trainers twice a day — at 5:30 a.m. and 5:30 p.m. She worked out five to six times a week, gave up alcohol, bad foods, she joined a dance studio, she would travel to a gym in northwest Austin, and then headed south for boot camp.

Her dad’s cancer battle was her biggest motivator, but bittersweet at the same time.

“I’m working toward my dad being able to pass away peacefully,” she said. “I needed him to have that comfort and to know that he could be okay being gone and knowing that I can take care of my mom and be there for my family.”

In about eight months, Vanda lost 100 pounds. Her dad got to see Vanda’s healthy transformation. He lived a couple of more years after his diagnosis.

“I remember being able to go one last round with him. It was really nice,” Vanda teared up as she shared the time her dad asked her to do something she really didn’t want to do. “I remember coming home one weekend and he was like ‘You want to go for a run?’ He was a very stoic man but I could see it meant so much to him for me to be like, ‘Yeah, let’s go on a run.’”

Running was never her passion, but it was for her dad, a marathon runner. He ran five miles a day while going through chemotherapy. Vanda says for her dad it was never about the running pace, it was about being slow, steady and finishing.

Vanda carries on that mentality. She and her boyfriend recently qualified to compete in the World Series of Fitness also known as Hyrox. It’s an intense fitness competition that made its debut in Austin in May. It involves running, pushing and pulling weight sleds and a series of other workouts. Vanda was surprised she placed third in her age division and she’s moving on to compete in the U.S. championships next week.

“I was getting lapped by people, I was just doing my own thing, I just wanted to finish and feel good,” she said. “Later, someone said ‘I think someone was calling your name because you placed.’ And I said ‘No, they must have been calling something like Amanda.’”

Vanda is tough as nails. She pushed a 175-pound sled and pulled a 110-pound sled without breaking her own blinged out, bedazzled nails. She doesn’t plan to cut them when she competes in nationals because this is how she trains, and how she competes.

“I may be slow as a panda, but I’m going to finish it no matter what,” she said decidedly. Vanda plans to enjoy every moment of her competition, doing her best and smiling toward the finish line.

The most challenging part for Vanda will be running, but it’s her dad’s memory that will keep her going. Every time she runs her dad’s coaching reappears reminding her about her posture, and how to control her breathing.

Previous Blog: How 2020 turned out to be my best year in fitness despite a stroke, diabetes, pandemic

“My dad was such an inspiration growing up and a fit, disciplined guy,” said Vanda. “He loved the fact that I was active playing sports growing up, tennis, soccer, golf, all the same sports he liked to do.”

Before going to UT, Vanda had a bad knee injury that required surgery, but rehab didn’t go so well, and that sparked the weight gain. Today she’s an athlete, a certified Lagree instructor and passionate about sharing her story.

“I hope that anyone who thinks that they are at that point of too far gone will see my story and say if she can do it, I can do it,” Vanda said.

Jose Torres is a morning news producer with KXAN. His blog will bring stories of hope and determination from others who have fought through their own health struggles and life challenges. He looks forward to sharing those conversations in future blogs.