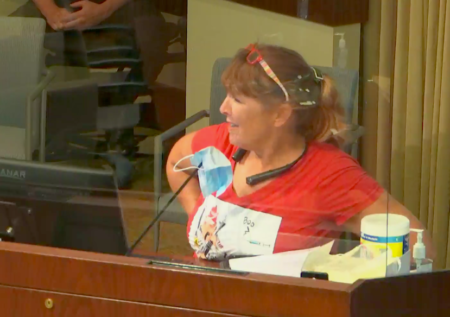 Fears about a new coronavirus variant and a call for indoor masking of school kids brought emotions to a boiling point at the Johnson County Commission meeting Thursday. A crowd of around 30 people – some of whom may have been responding to a call posted on social media – turned the stairwell outside the hearing chamber into a whooping, clapping anti-mask and anti-vaccination rally reminiscent of a few months ago.

The majority of those who spoke during the public comment time were strongly against recommendations to wear masks and some were also against vaccination. At one point at the end of the roughly hour-long comment period, some attendees were shouting, calling names.

The situation reached a peak after Cassie Woolworth of Olathe took the podium and spoke in favor of following health officials’ recommendations. Woolworth is a regular commenter at the meetings who often taunts the people who cite questionable articles opposed to public health advice.

“Thousands of surgeons are laughing at you, ha ha ha ha,” she said Thursday. Later she added, “We need to get vaccinated. Masks won’t work because we have the Covidiots here deciding not to wear them and spread all their goddamn germs everywhere.”

First day back in higher-capacity room

A social media post that appeared briefly on Nextdoor asked people to send emails to the commission and claimed the commissioners were “threatening to reinstate the mask mandate.” Chairman Ed Eilert said at the outset that there was no such agenda item.

A common theme among commenters referenced the letter recently sent by the county health department to six school superintendents urging school officials to promote vaccinations and require indoor mask wearing for those not vaccinated. This would include all children under 12, since no vaccine for that age group is yet available.

Commenters on Thursday particular aim at Sanmi Areola, with one man calling him “veterinarian Areola,” and others noted that he is not a medical doctor. Areola’s doctoral degree, according to his LinkedIn profile, is in environmental toxicology and he was a postdoctoral fellow at Baylor College of Medicine who also worked for the Nashville public health department for seventeen years. His undergraduate degree was in agriculture and animal science.

Emily Carpenter of Lenexa said, “I would like to know from you the board why a non-medical doctor is giving out medical advice and recommendations.” She also questioned his appointment process. “For somebody in a position that seems to have a lot of say over our community a non-elected staff member should not be making that decision without the input of an elected official.”

Another speaker, Laura Klingensmith of Stilwell echoed those sentiments. “For the life of me I cannot understand how an unelected county official could ask the school district to segregate and discriminate against unvaccinated kids.”

She continued, “The thing is, I’m the parent and I make the decision if my child wears a mask or not or is vaccinated or not. My child, my choice.”

Owen Frederick of Overland Park summed it up: “Everybody here is a little upset because we don’t like a small percentage of the population telling the rest of us what to do.”

But two speakers with children at high risk spoke remotely at the beginning of the meeting in favor of the school masks and precautions.

Jennifer Robinson of Olathe said her 11-year-old son has been masking since early childhood classes at age four. The family had no close contact with anyone outside the home during the Covid-19 outbreak.

“For fourteen months we did everything in our power to protect him as we watched a community that in large part didn’t care,” she said. He missed his entire fourth grade year and the family is desperate to get him back in school. “We need masking for that to happen.”

Ryan Zimmerman, who has a high-risk nine-year-old, noted that since the Olathe school district students aren’t required to wear masks, most won’t.

“Zero percent of elementary school children have been vaccinated. Literally nothing has changed over the last year. You’re going back to the exact same environment but now everybody is just like, ‘Well, good luck,’” he said.

Areola said later, during a coronavirus update, that the mask recommendations are intended to provide enough safety to keep the schools open. Wearing masks and keeping a three-foot distance worked well last year at keeping infection down, he said.

That’s especially important now that the highly transmissible Delta variant has gained dominance, he said. Allowing it to proliferate gives the virus more chances to mutate, he said. He added that Angela Myers, division director of infectious diseases at Children’s Mercy Hospital, recently said in-person school without mask requirement for children is a “recipe for disaster.”

Areola also pushed back “vehemently and strongly” against assertions by Commissioner Charlotte O’Hara that the vaccines offered in the United Kingdom have “horrific side effects.”

That comment was inaccurate, he said. The vaccine has been thoroughly tested and found to be very safe, he said.

O’Hara then asked why the county is focused on schools when children don’t usually get severe cases and offices and other venues are opening. “Is this just the first step into taking requirement to reinstate the mask mandate for everyone?”