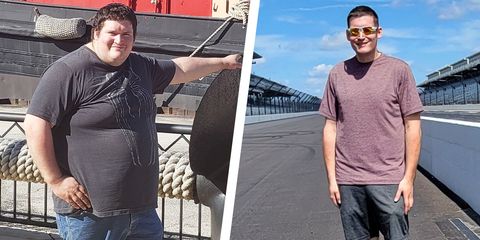 Some of the most dramatic weight loss transformations begin with the simplest changes. For 30-year-old Dustin Schmidt, a project engineer at Oshkosh Defense in Appleton, Wisconsin, it was going for a walk. Here, Schmidt shares how he took control of his diet, stayed consistent, and ultimately lost more than 200 pounds on his way to achieving a healthier, more active lifestyle.

For as long as I can remember, I’ve been overweight. It runs in my family; growing up we always ate large portions. As a freshman in high school, I was already over 300 pounds.

At my job—I’m a project engineer—I’d sit at a computer all day, then come home and watch television at night. I wasn’t getting much movement, and my diet had always been pretty bad. A year and a half ago, at age 29, I was my heaviest, around 460 pounds.

I had severe depression. I had no self-esteem; I felt desperately alone and I knew my weight was keeping me from having a relationship, being the person I wanted to be. I wasn’t sure I wanted to live anymore. Confronting that feeling, I decided I had to change. I would either lose the weight or die, there was no third option. I took the saying “do or die” in its most literal form.

I started walking, three or four miles every day after work. That wasn’t easy for a 400-pound man. After about two months I joined a gym, spending about an hour a day there. I did mostly cardio, but started strength training as well. I used as many machines as I could to keep from being bored. I had a few introductory sessions with personal trainers, but mostly I was on my own.

I also revamped my diet. I cut my calories to about 2,000 a day, about half of what I figured I was burning, and started doing the CICO diet. Fast food, liquid calories, sweets, and most carbs—they all had to go.

I lost the weight pretty quickly; actually, quicker than I would recommend to someone else trying to lose. In about 16 months I was down 235 pounds. Most of that was in the first year: I think I lost 200 pounds in the first ten months, before the loss started to slow.

I used to watch The Biggest Loser and was always amazed by what those people did. Now I’ve lost more weight than almost every person on that show.

I have had a great response from friends and family. Because I was so large, it took people a while to notice; I was probably already down about 80 pounds before I started getting the “Did you lose some weight?” Now I look like a completely different person. I honestly don’t recognize myself sometimes. I definitely have more confidence and have even started to go on dates, which I never would have done when I was big. This success has made me realize that I have the ability to improve all aspects of my life. Whether it be my health, career, or relationships, I want to strive to be the best at all of those things and I know I can be.

I’ve learned that to succeed you really have to get yourself in the right place, mentally. You will face no greater opponent in weight loss than your own mind. You have to want to lose the weight more than you want that cake or second serving, more than you want to sit on the couch and watch TV, more than anything else that could get between you and your goals. —As told to Jesse Hicks

Jesse Hicks
Jesse Hicks is a Detroit-based writer and former features editor at The Verge who specializes in longform stories about science, health, and technology.