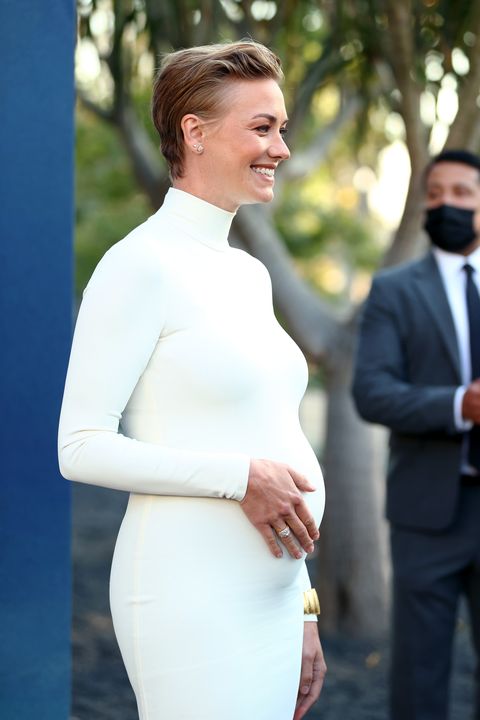 The actress announced her second pregnancy at the premiere of her new film, The Tomorrow War, last night in Los Angeles. The Handmaid’s Tale star stepped onto the red carpet in a white figure-hugging Brandon Maxwell dress, holding her baby bump in front of the cameras.

“I’m super excited to be here, and this is a very special moment,” she told Entertainment Tonight at the event. Strahovski added that she’s “about halfway” through her pregnancy and is expecting a son. “I’m having a boy! You heard it first!”

She welcomed her first child, a baby boy named William, with her husband, Tim Loden, in 2018. “My heart has melted in a billion pieces a thousand times already,” she wrote at the time her firstborn arrived, per E! News.

Strahovski is also fresh off the Season 4 finale of The Handmaid’s Tale, which brought an explosive but “satisfying” ending in mid-June. She talked to BAZAAR.com about where her character Serena Joy’s story could go next, especially now that she’s also expecting a child. (Warning, spoilers ahead!)

“I have no idea what they’re going to come up with,” she said of Serena’s Season 5 storyline, “but to me, the most obvious thing that would be pretty fun to play out would be if Serena did get sent back to Gilead and become a handmaid because she’s now a fertile woman, and how she would handle that, especially if it’s a particularly abusive situation and it echoes June’s journey, or not.”

However, it’s possible that the writers could create a more “infuriating” pathway for Serena, where she “actually finds success outside of the detention center in Canada in the way of politics or becoming some kind of spokeswoman, picking up where she left off pre-Gilead: writing a book, getting a following, becoming the female president of Canada, I don’t know,” Strahovski joked.