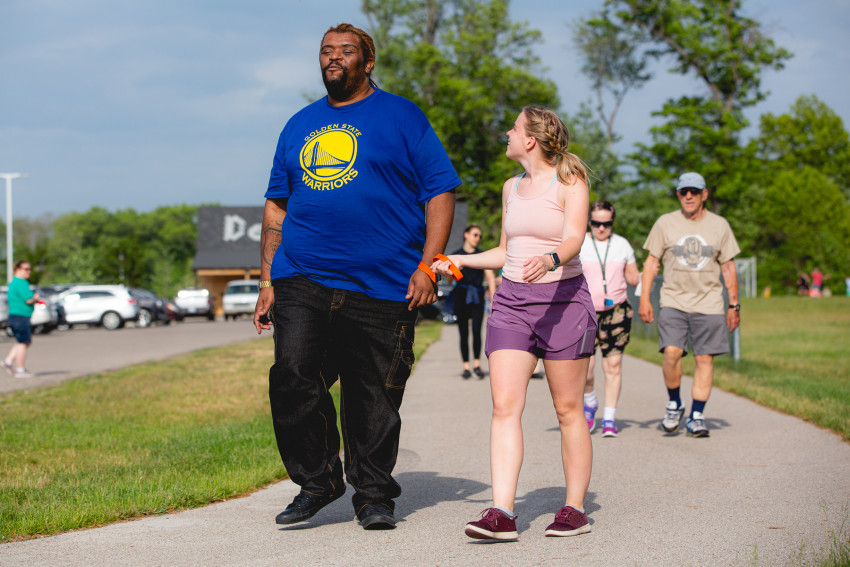 KALAMAZOO, Mich.—Losing his vision has opened Robert Parsons’ eyes to a future filled with purpose and promise. Earning two master’s degrees from Western Michigan University, he’s become an inspirational force for change in the blindness and low vision communities.

It’s a jarring contrast to his life less than a decade ago—a college dropout working a retail job he disliked with no real career aspirations. His life was nearly cut short in 2014 when he interrupted a home invasion and was shot in the head. He experienced total vision loss and a traumatic brain injury. Instead of getting discouraged, Parson’s found hope.

“You really can’t imagine something until you have no choice but to face it. I think the reason I was able to adapt the way I did and push through some of the darker thoughts I could have had was because I was still riding on the high that I actually survived the attack,” he says. “That’s what carried me for a long time. So, when that euphoria fell away, I was already accomplishing so much that I didn’t really have a reason to feel down about it.”

Parsons endured several brain surgeries and spent eight months in medical rehabilitation. He then began vocational rehabilitation, learning to read Braille and use a white cane to travel and function independently. He decided to enroll in a community college to build those skills and hasn’t looked back.

“I started at the associate degree level … and just worked my way up degree after degree. Now I’m here,” says Parsons, who will receive master’s degrees in rehabilitation counseling and vision rehabilitation therapy from Western on Saturday, June 26.

He attributes his dramatic shift in career trajectory to a counselor he was connected with during his recovery.

“My rehabilitation counselor was able to introduce me to so many opportunities and ways of bettering myself and picking myself back up to be able to go after my dreams,” he says. It inspired him to become a rehabilitation counselor as well. “I chose to follow that as an occupation in order to show not just homage to that counselor who made such a big change in my life, but so that I could be that change for the next generation of people coming in with blindness or low vision.”

That mission led him to Western, which boasts the longest-running vision rehabilitation therapy preparation program in the nation and the only program that offers a dual master’s option with teaching.

“The thing that makes me proud to be a Bronco is this is the first program I think I’ve ever gone through where expectations were never lowered,” he says. “I was always assumed to be just as capable as any other student in class or on campus. I love the fact we were able to be treated as equals and thrive despite having a disability.”

A strong advocate for destigmatizing disability, Parsons has already had an opportunity to impact lives—most recently at Mary Free Bed Rehabilitation

in Grand Rapids, Michigan, as the liaison for the wheelchair and adaptive sports departments. He coordinated programs that were inclusive for people with vision impairments, including creating innovative projects and programs such as an adaptive running and walking clinic.

“We also are fitting an existing archery program to become adaptive for visual impairments, so we’ll be fitting that to include a sighted spotter as well as an audible target and adjustable footholds in order to help with orientation.”

“I was also able to work with our veterans on being able to transition from a service-employment lifestyle to civil employment and understand certain types of soft skills and communication techniques that would be effective in the workplace. So that was a lot of fun,” says Parsons.

“I want to be able to shift the paradigm of what the rehabilitation profession looks like. For a long time, the profession has been people who are able-bodied teaching other people who are able-bodied how to deal with people who have disabilities, and I think some of the messaging gets a little lost,” he says, adding there’s a disconnect when you haven’t truly experienced disability. “Instead of just working as a counselor, I want to actually train future counselors and future teachers.”

He’s on his way to that goal, accepted into Western’s counselor education supervision doctoral program, which he will begin in the fall.

“I’ve realized with a Ph.D. I can affect change at the highest level possible. And if I have a hand in assisting how these people get certified, what type of standards we set and be a symbol of the actual population they’re working with, maybe it will affect change.”