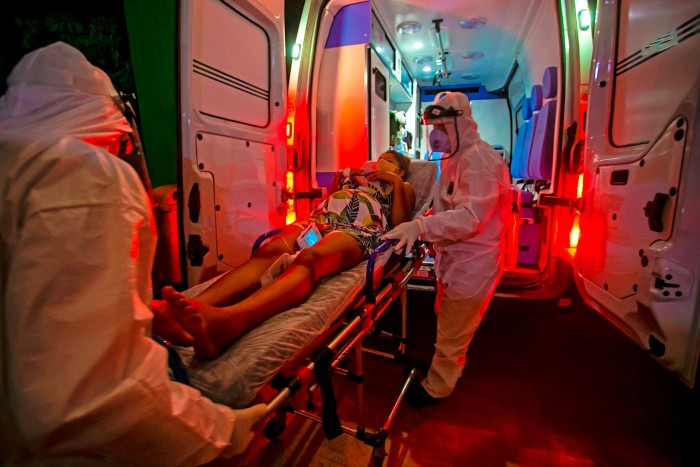 Following two difficult pregnancies, it seemed it might be third time lucky for Vanessa de Oliveira Silverio. But in her 34th week of gestation, she began to feel unwell and developed a cough. A coronavirus test returned positive, and breathing became difficult.

“She was very scared. She said that she was afraid to die, of having a caesarean [birth] and the baby not surviving,” said Douglas Silverio, her husband. Yet it was Vanessa, 33, who died during an emergency operation to deliver her baby in March.

Her death is one of hundreds of such tragedies to strike families in Brazil, leading to a mortality rate among new or soon-to-be mothers that has alarmed doctors and public health experts.

In total, more than 1,600 pregnant or post-partum women have succumbed to the respiratory disease since the start of the pandemic, according to the Brazilian Obstetric Observatory.

“Before the pandemic began, we already had a maternal death ratio of 55.3 for every 100,000 babies born alive, which is considered extremely high,” said Rossana Pulcineli Vieira Francisco, a professor at the University of São Paulo’s department of obstetrics and gynaecology who leads the research.

“It is not possible to say for sure that Brazil is the country where pregnant and post-partum women die the most by Covid, because there are not many population studies on death by Covid in these women,” added Francisco. “But we can certainly say that the numbers here are very high.”

Overall, maternal deaths in Brazil averaged 10 each week in the country during 2020, according to analysis by the observatory. This year that number has quadrupled to above 40, as mortality in the general population doubled.

Many explanations proposed echo those for the country’s wider coronavirus disaster, which has already claimed more than half a million lives.

The Covid-19 death toll in Latin America’s most populous nation is the second-highest in absolute terms after the US, and seventh on a per capita basis, according to FT analysis.

In the case of pregnant women, experts blame the combination of a strained healthcare system, inadequate and unequal provision of services, a lack of experience in treating such patients and the circulation of a more contagious variant of the virus.

Dr Lílian Cristina Moreira, a paediatrician for Rio de Janeiro, said research showed around half the pregnant women in certain Brazilian states who died from coronavirus did not have access to an intensive care unit or intubation.

“In every 100 pregnant women diagnosed with Covid, 12 die. It’s very high. Whereas in the population, the fatality rate is 2.8 per cent,” she said.

Pregnancy suppresses a woman’s immune system, leaving her more vulnerable to infectious diseases, while pressure on abdominal organs and the diaphragm can restrict breathing. Together with greater inflammation, the body is under stress.

Although congenital infection with Covid-19 is thought to be rare, mothers without symptoms can pass the virus on to newborns. More than 600 children in Brazil under a year old have died from the illness during the pandemic, according to government data.

Multiple experts said they did not believe the Gamma, or P. 1, strain of Sars-Cov-2, which originated in the Amazon, was in itself more harmful to pregnant women. But its greater transmissibility — around twice that of earlier variants — has resulted in a surge of infections over recent months that sometimes overwhelmed hospitals.

The effective shutdown of many regular health services during the pandemic also affected the availability of prenatal classes and family planning services, Moreira added.

“We believe that pregnant women were more vulnerable due to access to the health system and socio-economic status,” she said. “Black women and poor women died more.”

Even where the proper facilities and equipment are available, medical personnel are often unprepared to deal with severely ill pregnant women, said Marcelo Otsuka, a doctor and co-ordinator at the Brazilian Society of Infectology.

Treatment involves finely balanced clinical decisions. What happened in Vanessa de Oliveira Silverio’s case haunts her widower, Douglas, who lives in the city of São José dos Campos, in São Paulo state. “The doctor said she was stable, and then she died,” he said. “One of the doctors told me they didn’t know why the caesarean didn’t happen earlier. If they had, would it have been more effective?”

Fabiana Alves Sousa, from Ceará state in the poorer north-east, credits medical intervention for saving her and her baby’s lives.

The 31 year-old underwent an emergency caesarean at almost 30 weeks of pregnancy after contracting coronavirus. Now she says her son, Benjamin, is “full of health”. But the experience left a mark on her: “There were several mothers with Covid. And many did not survive childbirth.”

Many health professionals cite a failure of public health policy as a factor. Critics accuse the government of a lax, even negligent, attitude to the pandemic that has contributed its spread. 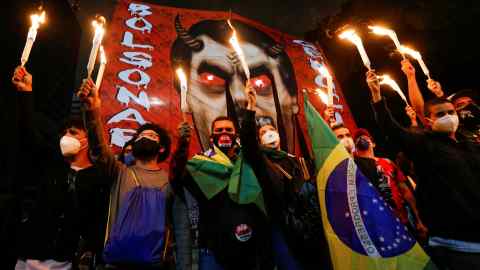 With fears rising about the Delta variant, another highly contagious mutation, experts stress the importance of inoculations. To date, around 14 per cent of Brazil’s population of 212m is fully immunised against the virus.

Brazil’s health minister, Marcelo Queiroga, announced on Thursday the resumption of vaccinations for expectant and new mothers without comorbidities. They had been restricted to those with underlying conditions in May, following the death of a 35 year-old pregnant woman who received the AstraZeneca jab.

“More than 2.5m women are expected to benefit from this stage of immunisation,” he tweeted.

It will be too late for Douglas Silverio, who now faces bringing up his three children alone. He collected his youngest, Maria Helena, from hospital on the day of his wife’s requiem mass.

“It was a day of tears, and suddenly there was the relief of bringing my daughter home. I was happy.”